The Month to Give Thanks for Adoption 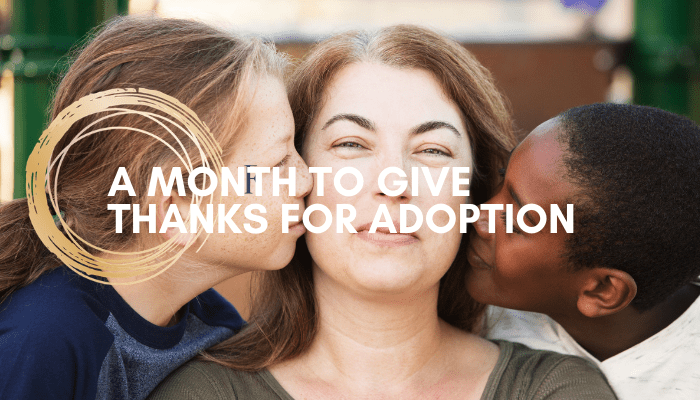 November is the month when we, as Americans, set aside one day to give thanks for all the blessings in our lives. For many families, it is also the month to give thanks for the process that allowed them to become parents. November is National Adoption Month. We celebrate by talking with 3 moms who adopted children into their families. Their reasons for adoption are varied. But the outcome is the same – love. Read the answers to 5 questions we asked these devoted parents.

1 – 2. How did you know you wanted to adopt? What convinced you adoption was the answer?

“We knew that we needed to adopt after 3 miscarriages. The last one was an ectopic pregnancy where I lost a part of a (fallopian) tube and ovary. We had already been talking about adoption before this happened but when the doctor walked into the room and told us what had just happened (ectopic pregnancy) we knew that adoption was for us!”

Adoption has blessed my life by giving me children I could not have. A huge answer to prayer was to be a mom. It also helped my relationship with God and what He says in the Bible about how we are God’s creation – all unique and special in His sight. It’s a journey I would not trade.

Adoption made me a mom! Being a mom is something I always wanted. I’m just blessed that another person had the courage to carry a child for nine months and then urn them over to let someone care and love that child forever. Amazing.

5. If your children answered the question, “What has adoption meant to me?” what would they say?

I would hope they would say they know how much they were loved and cared for.

L.L. – Mom to 3 biological children and 1 child adopted from overseas.

1. How did you know you wanted to adopt? What convinced you adoption was the answer?

Our adoption story is a bit different than many.  We were able to have biological children and do have 3 sons.  When I was pregnant with my 3rd son, my husband and I were sitting on a beach with some close friends and they had just had their third son. My friend was expressing how annoying she found it that so many people assumed she was disappointed by having another boy.  She asked my husband and I about us – would we be disappointed if our third child was another boy (we had decided not to find out the sex).  I said no, and if the time came that we wanted a daughter we would adopt rather than keeping “trying.”   That was the first moment I had that thought and it felt right. Once I said it out loud it became a plan. I strongly felt that we were a family that needed a daughter and somewhere in the world there was a daughter that needed a family.

A few years later when one of my older sons (3yo at the time) was saying his prayers he prayed for a little sister so he could put ponytails in her hair and take care of her.  I knew it was time to start the process.  There were so many decisions to be made – which country should we adopt from and which agency to use.  One Sunday I was in church, praying and fretting about these decisions, and a sudden sense of calm and peace came over me. A thought came to me – I truly believe God was talking to me- the thought was, “It doesn’t matter. My daughter would find her way to our family.” It really didn’t matter what choices I thought I was making, God was in control of the situation.

Where once I felt something was missing, it was now whole.

To me adoption is another way of growing our family.  It is everything. I think every emotion is involved.  I have guilt that our family’s  happiness and love came with another family’s loss and sadness.  I am so grateful for daughter’s birth mother.  What she did took such courage, strength and selflessness.

5. If your child answered the question, “What has adoption meant to me?” what would she say?

I asked our daughter, who is almost 18, what adoption meant to her. She said, “A second chance.”

My favorite quote ever –  “A child born to another woman calls me Mommy. The magnitude of the tragedy and the depth of that privilege is not lost on me.” – Joy Landers

K.C. – Mom to two biological children and one child adopted from their local foster care program.

1. How did you know you wanted to adopt?

I’ve always known I wanted to foster; adoption was just a natural part of that parenting journey. You fall in love with that child and you know he is meant to be a part of your family.

2. What convinced you adoption was the answer?

I knew our son was to be ours from the first moments I kissed his tiny cheeks. The Holy Spirit spoke to my soul … I knew he was ours.

Adoption has changed us in good ways…it has made us rethink the definition of family. It has made us look at the world with a broader view of God’s love for us.

I sometimes find myself forgetting our son was adopted. He is so much like his older siblings that it’s odd to think there isn’t a genetic link. So to ask what adoption means to me… it means loving a child I didn’t give birth to but one who grew in my heart.

5. If your child answered the question, “What has adoption meant to me?” what would he say?

He said, “I don’t know any different. It’s like I grew in your belly.”